October 14th marks the anniversary of the battle of Bristoe Station, the 151st as I write this. The 14th Connecticut saw action in this battle, which, although bloody, was minor by comparison to many of the unit’s other battles.

There was probably no regiment on either side that saw much more significant action than the 14th during its period of service. After mustering in on August 25, 1862, the thousand men of the regiment left immediately for the Virginia front, just missing Second Bull Run. But it was there in plenty of time for Antietam in September, suffering 137 casualties, continuing on to Fredericksburg in December, where it lost 122 men and officers in killed, wounded and missing.

In 1863 the 14th was engaged at Chancellorsville, Gettysburg, at Bristoe Station on October 14, at Blackburn’s Ford on the 17th, and at Mine Run on November 20. In 1864, the regiment saw action at Morton’s Ford, the Wilderness, Spotsylvania, Cold Harbor, and the siege of Petersburg. What’s more, it was among the regiments involved in the final squeeze that forced Robert E. Lee to Appomattox Court House. The 14th Connecticut suffered nearly 800 casualties during its less than three years of existence.

As for Bristoe Station: on this date in 1863 the site just south of Manassas saw the first significant action between the armies of Generals Lee and George Meade after Gettysburg. The fighting resulted in another Union victory, but one with unsettling implications for each side. Generals A.P. Hill and Richard Ewell performed poorly for Lee, and Meade, although the winner, failed to follow up, allowing Lee to escape once again. That failure contributed to President Lincoln’s increasing determination to bring Ulysses Grant (the descendant of one of the founders of Connecticut) east the following year. The 14th Connecticut, in the heart of the battle, suffered 26 killed and wounded. This map of the action at Bristoe Station is the work of Confederate mapmaker Jed Hotchkiss, famous for his maps of the Shenandoah Valley for Stonewall Jackson. 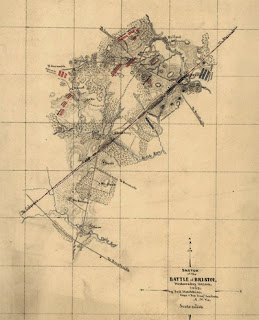