We are well into the Civil War 150th anniversaries. Last year: Chancellorsville and Gettysburg and Chicamauga. This year: the Wilderness and Spotsylvania and Cold Harbor and the seige of Petersburg. But there are other anniversaries to consider this year. This week marks the 160th anniversary of a milestone event, one that played a part in the inevitablity of war. And a man from Connecticut was watching closely to see what happened.

The milestone was the Kansas-Nebraska Act. On January 30, 1854, after months of negotiations, failed amendments, and succesful additions, debate opened in the Senate on the final version of the act. The bill passed the Senate in March and,after much further debate, got through the House of Representatives in May. President Franklin Pierce signed it into law the final week of May, 1854.

The Kansas-Nebraska Act effectively threw out the Missouri Compromise, which had kept slavery out of land above the 36 degree 30' parallel, with the exception of the new state of Missouri. The country had managed to avoid war over slavery for more than 30 years, thanks to the Compromise. But the new act permitted Kansas and Nebraska to come into the Union either slave or free, depending on the vote of white male settlers. 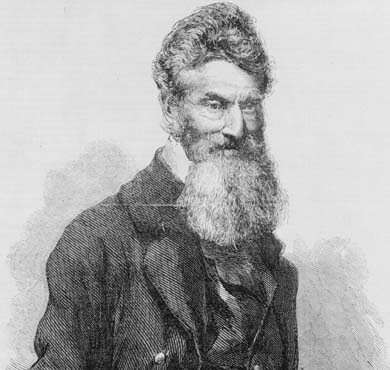 John Brown,a 54-year-old native of Torrington, Connecticut,was living--after a checkered personal and business career in the midwest--on a small farm in the rugged and cold Adirondack Mountains of New York. Not surprisingly, the farm was doing poorly, as was a settlement of free blacks that the ardent abolitionist supported in the area. When he heard that pro-slavery settlers were pouring into Kansas from slave-holding Missouri, Brown, his sons, and other supporters moved to Kansas to settle temporarily and to encourage anti-slavery sentiment. The Brown movement felt obligated to match violence on the part of pro-slavery settlers with equal violence of their own. Kansas became a bloody microcosm of national sentiment.

Later, Brown returned to the east where he traveled through New England, particularly Connecticut and Massachusetts, raising money for a new bold plan. That turned out to be his raid on the Federal arsenal at Harpers Ferry, then in Virginia. The raid, in October 1859, failed, but Brown, who was hanged six weeks later, made himself into a martyr to the cause of the abolition of slavery. The war could not then be avoided.

The house where John Brown was born is long gone, but there is a state historic sign at the location, a few miles west of Torrington just off Route 4. There is also a haunting reminder of the man who started the Civil War (or at least who assured that it would start when it did). The stone front steps to the old house remain. John Brown left Torrington as a child of five in 1805, but he was certainly old enough to have walked up those steps hundreds of times. So, two days from now, remember the 160th anniversary of a event that a righteous and violent descendant of New England puritans used to force his country to reach a goal that he knew in his soul was right.

Posted by Sharon at 2:21 PM No comments: