Today marks another important Civil War anniversary for a son of New England. On January 26. 1863, Joseph Hooker of Hadley, Massachusetts, became commander of the Army of the Potomac. He succeeded Ambrose Burnside, born in Indiana but better known as the Rhode Island manufacturer of the Burnside Carbine. Burnside failed as an arms manufacturer and he also failed with the Army of the Potomac. The disaster at Fredericksburg in December 1862 led to Burnside’s replacement by Hooker.

Joseph Hooker descended from two famous names of early New England and, by extension, of Colonial America. He was probably distantly related (most likely through common ancestors in England) to Rev. Thomas Hooker, the founder of Hartford, Connecticut, and one of the earliest settlers of that state. The general was more closely related through his mother Mary Seymour to Thomas Seymour, one of Connecticut’s governors during the 1850s. That relationship was not particularly close, and that was probably a good thing for Joseph Hooker’s reputation, particularly in the latter part of the war. Thomas Seymour thought that there wasn’t anything particularly wrong with slavery (not an unique attitude in pre-war New England) and once the war started he was just one tiny step short of being a Connecticut Copperhead.

Thomas Seymour thought enough of himself to run for governor in 1863 against Lincoln loyalist William Buckingham and, after failing there, to try to take the Democratic nomination for President away from George McClellan in 1864, failing there as well.

Joseph Hooker didn’t last long at the head of the Army of the Potomac. He was outmaneuvered by Robert E. Lee and Stonewall Jackson at Chancellorsville three months after he took command and Chancellorsville proved to be an expensive defeat for his army. Hooker was replaced in the east but regained much of his reputation at Lookout Mountain and Chattanooga. He spent very little time in New England after the war, dividing his postwar years between Cincinnati and New York.
Posted by Sharon at 9:25 AM No comments: 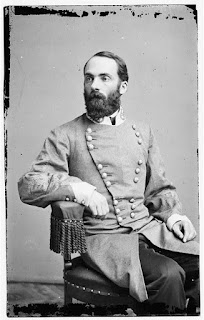